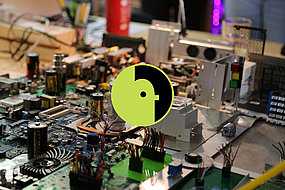 What could a creature made out of scrap look like? Does it have a doll's head for a head and an old electric shaver as a body and it moves around using the vibration of the shaver? Maybe! In the Tinkertank Workshop we will build characters out of electronic scrap. By deconstructing broken things that surround us and getting inspiration out of it we design new worlds of analogue characters which we will animate by the power of circuits, electricity and programming.

The workshop is scheduled as part of the curriculum in the Animationsinstitut for third-year students.

Animationsinstitut, part of Filmakademie Baden-Württemberg, was established in 2002. Since then, it has evolved into one of the world’s most renowned educational institutions for animation, VFX and games.

Animationsinstitut offers the Film + Media diploma course with a focus on Animation or Interactive Media, along with various specialization options. Education is practical and project-based, encouraging the interdisciplinary exchange with all Filmakademie students right from the start. In addition, Animationsinstitut is part of a strong international network: Distinguished guest lecturers from Europe, the USA and Germany teach students, while a lively exchange with leading international film school is taking place. Thanks to their great success at major festivals, where their diploma projects win internationally renowned awards, Animationsinstitut alumni are much sought-after.

Hands-on training at the institute is supplemented by scientific research and development work together with national and international partners.

The workshop will be given by Tinkertank.